GIVING A COMPANY AWAY 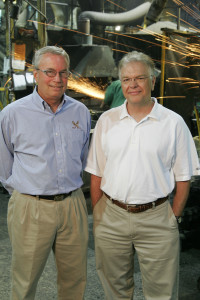 MUSKEGON — The owners of a lakeshore foundry have found a way to transition out of the company — by giving it away to their employees.

VP John Workman told MiBiz the plan started a few years ago when he and President Mark Fazakerley started to think about how they wanted to eventually end their careers.

“We want to keep the company in Muskegon to benefit the employees,” Workman said, “but with any business, you need to sell at some point.”

Workman and Fazakerley looked at their options. They could sell the highly successful Eagle Alloy to a holding company, but they didn’t think that was the best option to keep the company in business in Muskegon County’s Egelston Township. Over the course of their careers, they’d seen too many examples of holding companies closing up a local operation and taking the business elsewhere.

The company could also sell to an individual they didn’t know, but that, too, left them with questions.

“We would not know how they would proceed with the business,” Workman said.

The business partners also knew they didn’t want to have a succession, or a takeover by their children.

“We decided early on that wasn’t the appropriate strategy,” he said, noting the owners had a mix of male and female children. “Given those variations and the observations of other companies that struggled with that concept, we opted not to make that a viable option.”

The route they decided to take was an employee stock ownership plan (ESOP).

“The ESOP we felt was the best option for Eagle Alloy to be here and thriving in 50 years and benefiting the employees that made it a success,” Workman said. “We made the decision to do that (since) we’re not getting any younger.”

Workman looked at several ESOP examples from around the region and the country and came to conclusion that the benefits outweighed the possible negatives.

One major question companies like Eagle Alloy face is how to fund the ESOP plan. They could borrow money and fund the process through cashflow or, if the company made money, the employees could purchase the stock from the ownership. That was the route they decided to take.

“We did not want to leverage the business to find the money,” he said.

With the ESOP plan, when Eagle Alloy makes money, it contributes a portion of the profits to a trust, which then acquires stock for the employees. The employees are able to make the purchases pretax, much like putting money into a 401(k). The funds also are tax deductible for the company.

Eagle Alloy is working with the Menke Group, a 34-year-old ESOP advisory business; they were referred to the consultants by Comerica Bank.

Currently, after four years of buying stock, employees own about 15 percent of the company, a percentage Workman hopes will grow each year. One thing curbing the growth of the ESOP is that the company is still doing profit sharing with the employees.

“We wanted to add a benefit, not detract from that, but it does slow down the process,” he said.

Employees must be with the company for five years before they are totally vested and able to buy stock.

The ESOP plan isn’t without risk, and that’s not lost on Workman and Fazakerley. The plan has rules in place to protect the company in the case of mass retirements or other problems, according to Workman. The plan was also pre-funded for four years.

An outside appraiser comes into the company annually and examines the books to determine a value for the company, which determines Eagle Alloy’s stock price. After the first year, the company’s value has appreciated every year, buoyed by the business’ success in gaining business coming back from China. (See the July 7 edition of MiBiz for a story about why Eagle Alloy has been able to stay strong.)

“What creates value is the earning potential of the company,” Workman said. “It all depends on profitability; it’s all based on how well you do and the potential for next year.”

Because the company had been profit sharing for years, the employees always had a good idea of how the business was doing. The ownership made sure to share the numbers with the employees on a regular basis, which means even more to them now with the ESOP.

“They’re in tune to how good we’re doing in a given month and why,” Workman said. “That leads to an enhanced feeling of ownership.”

That’s not to say they could take over the company and oust Workman and Fazakerley. The employees own non-voting stock for which the two owners are trustees.

Workman, 60, knows this ESOP plan is not a short-term way for he or Fazakerley to retire. It will take at least 8-10 years for the company to be in a position to buy his stock. As trustees, Workman and Fazakerley would also select their replacements.

Their goal, however, is to be able to push responsibility down the ladder and have the management and employees be in a position to run the company. All employees would be granted a “tremendous amount of security” for their retirement, giving them the impetus to work to make the company successful.

The Eagle Group also owns three other businesses besides Eagle Alloy, and the owners also have plans to turn those into ESOPs as well.

“The company has to be in the right position,” Workman said.